Choose your kite size and if needed a bar and pump.

Sculp – One World, One Kite

The Sculp from CrazyFly is a sporty all-rounder tailored to almost all kitesurfers and riding styles. The Hybrid Delta Bow Shape makes it the most versatile and user-friendly kite CrazyFly has ever built – light on the bar, intuitive control, lots of depower and progressive power delivery. Whether you’re into old school, freestyle, kite loops, big air or foiling, the new Sculp will definitely deliver.

The short 8-point bridle is precisely tuned for kite loops. The Sculp turns fast and tight, but with good line tension and is easy to catch after the loop. With the Hybrid Delta Bow shape and short bridle, the Sculp offers plenty of pop, drift and slack for unhooking.

The new Sculp received another major upgrade. Weight has once again been reduced. Compared to last year, the 14m kite now weighs another 300 grams less, coming in at 0.271 kg per m2. This was achieved by implementing the lightweight Tertex material. It is two times stronger than CrazyFly’s Triplex ripstop and at the same time TerTex is forty percent lighter than the Dacron material CrazyFly uses.

The weight reduction makes a big difference in how the Sculp kite performs. Lighter kites move faster through the air, are easier to relaunch and turn quicker. It also increases the wind range, as low end performance is increased, because the kite is still able to fly in lighter winds.

With the weight reduction, the bridle of the Sculp needed to be redesigned to squeeze the best possible performance and take full advantage of the weight savings. The canopy is again more refined with reduced number of panels. 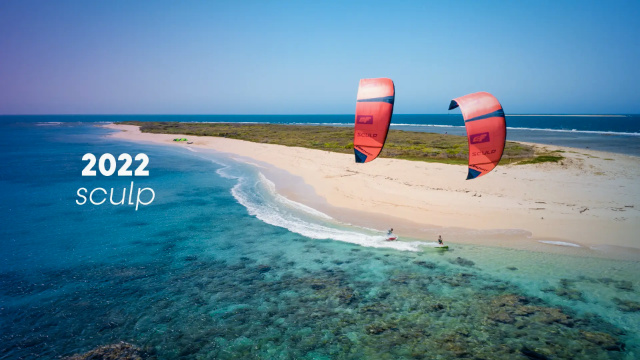 The video will be loaded if you consent to the privacy declaration of Vimeo.

The Sculp kite is manufactured directly at CrazyFly’s headquarters in Slovakia, so it is made in Europe. There is no interface between manufacturer and producer – everything comes from a single source. CrazyFly sets new manufacturing standards and leaves nothing to chance. For example, the latest manufacturing technologies are used and seams are tested in a laboratory. CrazyFly confidently offers a three-year warranty on its kites.

Versatile and Easy to Handle…

The new shape combines the advantages of flat delta and bow shapes. This makes the kite a versatile all-rounder with great hangtime, stunning kite loops, unhooked pop and slack with pivotal turning characteristics. 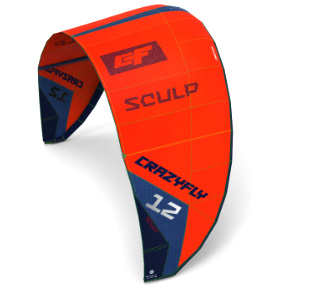 Three struts, instead of five saves weight and increases the effective aerodynamic area. The compact shape in combination with high-quality materials ensure an optimal ratio of form stability to weight as well as the best possible fabric tension with only three struts. 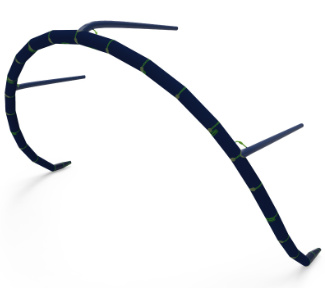 Twice as Strong and 40% Lighter…

TerTex is a brand new material used on all 2022 CrazyFly kites. It is two times stronger than Triplex triple ripstop and at the same time TerTex is forty percent lighter than the Dacron material. Applied on all struts, wingtips and over the central strut of all 2022 CrazyFly kites, TerTex radically reduces kite weight. Lighter kites have better low end, move faster through the air, are easier to relaunch and turn quicker. TerTex also increases the wind range, as low end performance is increased, because the lighter kite is still able to fly in lighter winds. 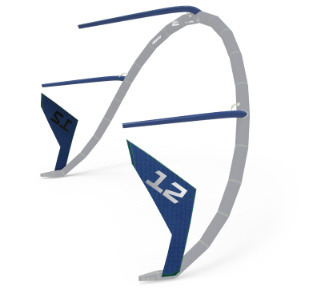 With the Airlock valve you will inflate your kite with less resistance, faster. The nozzle of your pump is securely attached to the air inlet with a half turn and is guaranteed not to pop off when pumping. After kiting, you deflate in no time at all and have your feet dry faster. 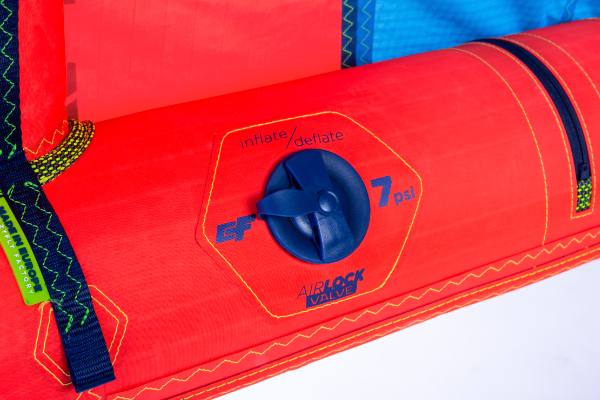 The Leading Edge seam has been reinforced with a second layer of Dacron. In the centre, the seam is elegantly routed past the valves. 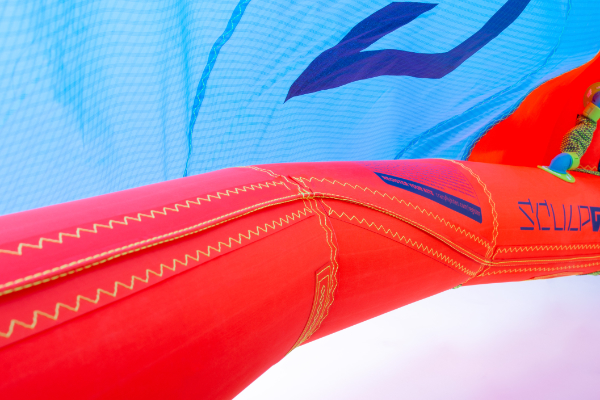 The backlines are directly attached to the main tube. This way the power distribution in the canopy is more even and the kite more responsive. 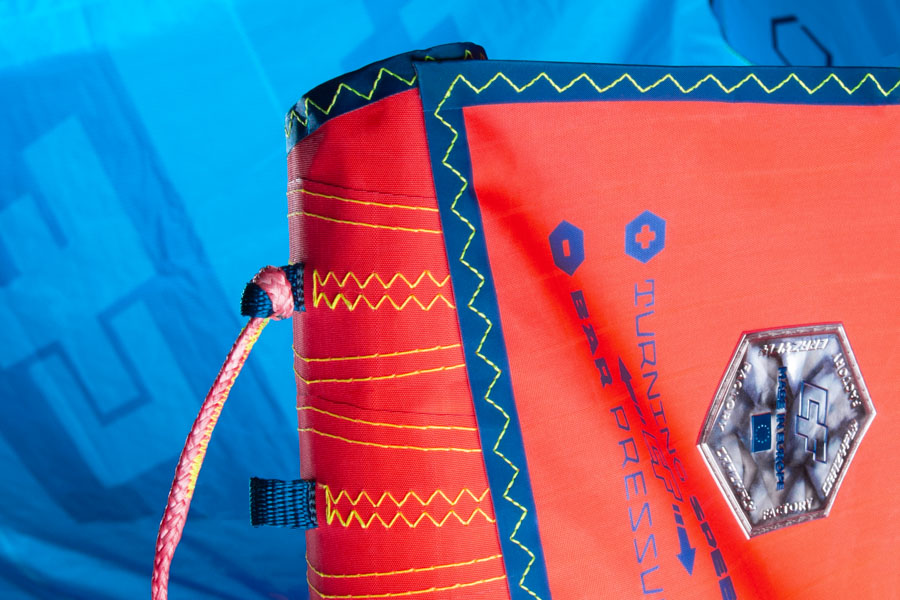 More Even Force Distribution and Stability…

The double layer of ripstop along the trailing edge saves weight compared to heavyweight material and ensures a more even distribution of force. This also benefits better shape retention and reduces flutter, which not ultimately leads to longer life. 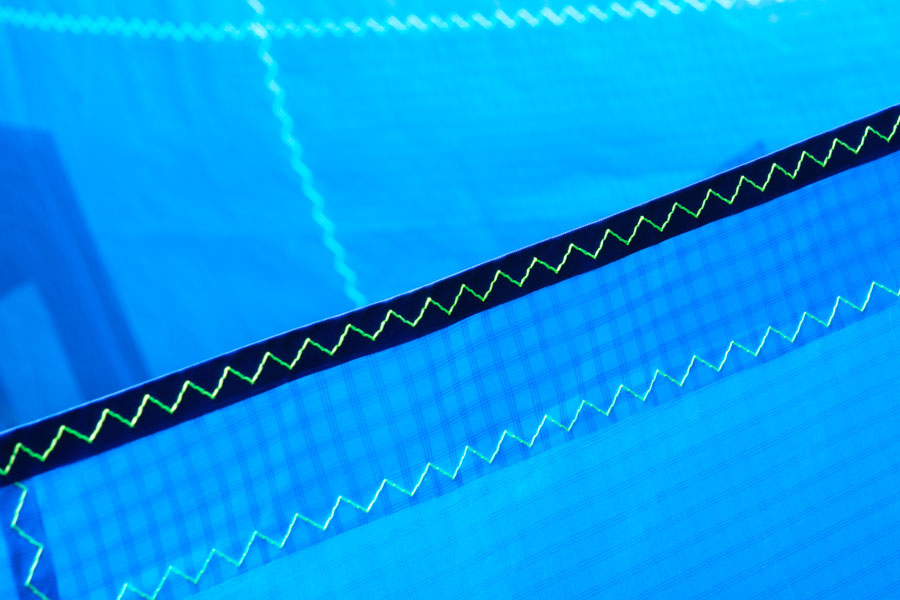 Arptex patches on the most sensitive contact points protect the kite from unnecessary damage and save you expensive repairs. Officially, Arptex is said to withstand up to 100,000 contacts with abrasive surfaces before suffering damage. 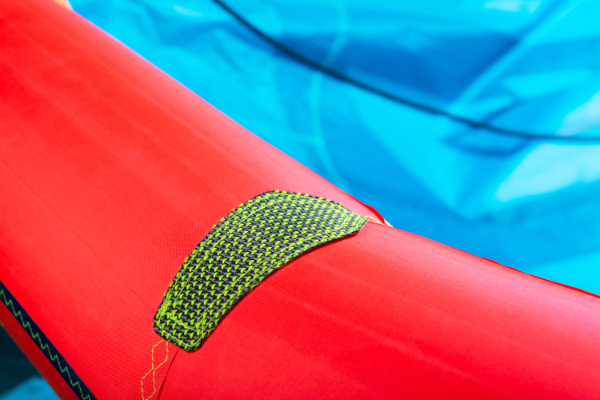 CrazyFly offers a three-year warranty on all CrazyFly kites and boards from 2019 onwards. and goes beyond the warranty of other manufacturers. In order to benefit from the warranty, you must return your purchased board or kite to within 30 days of purchase from CrazyFly. You can find all details about the warranty on our page CrazyFly Manufacturer Warranty. 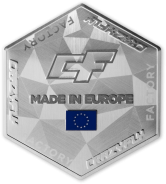 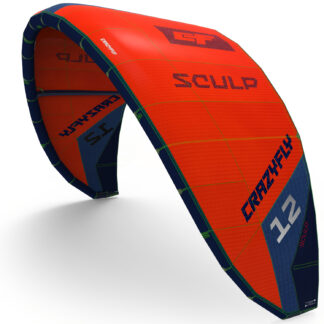